Every year hundreds of girls from the Mara region in Tanzania flee from home to escape the traditional female circumcision.

With the support of the Tanzania Development Trust a Safe House was therefore set up in Mugumu in 2014 and a second Safe House in Butiama in 2017. Girls and young women fleeing genital mutilation and other gender-related violence find there refuge.

In 2015-2016 the Van Doorn Foundation supported the establishment of a recreation and training centre at the Mugumu Safe House and in 2018-2019 the same at the Butiama Safe House, where these girls can learn a trade and find distractions.

The Mara Region is located north of Mwanza and covers a large area from Lake Victoria, to the Serengeti National Park, up to the border with Kenya; also known as the land of the Maasai.

This region is famous for the most diverse, beautiful and spectacular ecosystems of Africa and possibly the best safaris in the world but also for the Maasai, the local semi-nomadic population known for their distinctive customs and dress. Equally well known are the Abakuria, originally also primarily cattle-herding pastoralists, but with a history of forcible migrations away from larger and more powerful Masaai. This meant that their land became restricted to the hills just east of Lake Victoria. Subsistence farming became their primary occupation, although cattle remained important for the Abakuria, not only for food (mainly milk) but also for use in ritual ceremonies and for exchange of bride wealth (dowry payment for brides).

The Abakuria are strongly patriarchal, with older men deciding on all important matters of each community. Both boys and girls who have reached adolescence have to undergo a painful circumcision, performed without anaesthesia. The Abakuria believe that female circumcision is necessary and a man can reject any woman who has not undergone this as non-marriageable or only worth a low dowry. But for others female circumcision is nothing less than genital mutilation, a habit widely criticised abroad and by women who have suffered it themselves.

Girls generally have no access to education or training as a result of the traditions of their tribes and customs. Upon reaching adolescence a lot of girls / young women run away from home to escape genital mutilation and other gender-based violence. Some girls seek refuse at the church and ask there for protection.

With support of Tanzania Development Trust, the Diocese of Mara built in 2014 a Safe House where girls / young women who fled home to escape genital mutilation and other gender-based violence find safe accommodation.

The progress and result of the 1st phase

With financial support from the Van Doorn Foundation, a training center was set up in 2015, where young women and girls can learn a trade and get the necessary distraction. The Safe House built in 2014 was provided with an area for recreation that could also be used for vocational training. In March 2015, we were able to collect the EUR 4,300 needed for teachers’ salaries and the purchase of sewing machines and fabric. The Diocese made a contribution in the form of having paid the transport (bus), the school uniforms and textbooks for the girls themselves and the Tanzanian Development Trust pledged funds that made it possible to provide vocational training to twice the number of girls. The learning materials were ordered at the end of March 2015 and in April 2015 the vocational training started.

In September 2015, the centre generated already enough revenue (from sales of items produced by the centre) that it could finance 60% of its operational cost. The progress report of December 2015 showed that the centre in fact generated enough revenues to provide 170 refugee girls the necessary basic needs. The sustainability of this centre looks promising!

The Safe House wanted to set up a workshop next to the VTC, where young women and girls can practise the trades they acquired during the training in the VTC. In the workshop, they can produce high quality products for sale in different markets. The workshop also makes it possible to those for which a longer stay in the Safe House is necessary because of circumstances at home, to continue to practise and improve their skills. Eventually, they will be able to generate their own income (home industry or others).

In 2016, thanks to the Addo Kranendonk Fund, the Van Doorn Foundation was able to make EUR 13.900 available for the construction of the workshop and the purchase of sewing machines and teaching aids. The construction acually started in March 2016.

The circumcision of young Masai girls traditionally takes place in December and every year the management of the Safe House have their hands full with the reception of large group of young girls who flee FGM. In December 2016, there were 275 girls, about 155 of whom could eventually return home after negotiations with the parents. In addition to caring for the remaining girls, negotiations with their parents also consume a lot of time. As a result, the construction of the workshop took longer than planned, but in early 2017 it was put into operation!

The progress and result of the 2nd phase

In September 2017 and August 2018, the Van Doorn Foundation received from the Soroptimist Club – West Betuwe, a donation from resp. EUR 2,500 and EUR 3,500 to set up a training center at the second Safe House. With these the necessary training resources (machines, tools) have been purchased. In June 2019, the S&C vd Lee Foundation made EUR 2,500 available for this new recreation and training center. These were spent on the purchase of training material for the training in making batik fabrics, soap, baskets and embroidered tablecloths.

Possibly this center also will after some time generate sufficient income (with the sales of articles produced by the center) that it can finance the operational costs of the center. Tools for vocational training for youth in Ndola – Zambia 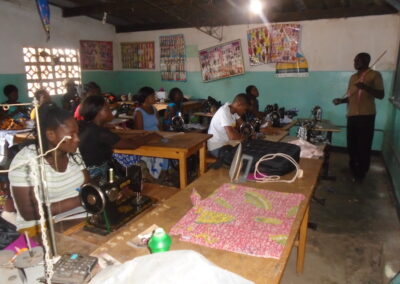 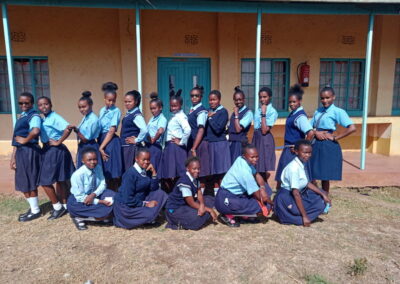 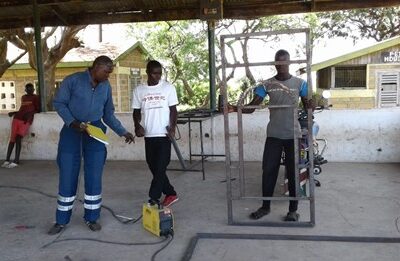